Drawing 7: drawing out your ideas

We don’t often talk about the way that drawing actually helps us to improve or ‘draw out’ our ideas. We focus on it as a final result or  as an under-drawing in a painting or other 2d artwork.

When we draw to express an idea, it helps us to see possibilities and problems that we probably couldn’t while we were only thinking about it. Drawing it lets us build upon what we have managed to plan in our minds.

People sometimes think of drawing as something you must be able to do well in order to create art. But I don’t think you need to be particularly skillful in order to make art if the drawing is not the final piece. And even  if it is part of the final piece, a not-very-skilful drawing that’s full of energy and meaning can still be good art.

My friend Beck who is an artist, is very good drawer, but she does a painting she doesn’t do a drawing first. She says they are two different things. And she also doesn’t like to think too much about her art works before she starts them because she says she starts to second guess herself too much, and wonder whether it will be good enough or worth doing.

But for me, especially since I started doing lots of sculpture, there are both technical and philosophical questions I like to answer before I begin.

I use drawing in 3 distinct ways:

Above: an example of me jotting down my ideas, a page of my notebook,  just scrappy sketches.

Have you ever seen an architect working on a sketch design? They have their roll of yellow trace, [ costs a mint and bears a striking resemblance to  the  unwaxed paper you wrap your sandwiches in, only its yellow] and  they will draw and re-draw their first ‘sketch ideas’ for their building. When they do this, they are expanding the possibilities of what their imaginations can come up with, and they are refining  their design notions.  This bit can go on for hours, days, weeks, and its important because this is where they are playing with their ideas.

Above: shetch by Louis I. Kahn  ‘Third of a Series of Three Perspectives of a Gallery Showing Variations in Lighting and Seasonal Conditions’, 1966-72.

Above: a beautiful sketch by Frank Lloyd Wright for ‘The Gordon Strong Automobile Objective’, 1924-1925. Apparently this was Franks first foray into a circular building, and of course he used his sketches to figure out how it would all work. It never got built but we can see how much it resembles the Guggenheim Museum which opened in 1959.

Above: You can also see how Frank used his previous efforts in this groovy auto showroom that was at 430 Park Avenue, New york, designed in 1954 for auto importer Max Hoffman. Note the groovy spiral forms. See my point?  Sketching ideas is never a waste of time.

The architect [or landscape architect] is working towards something: are they trying to work the shape of a building into an existing scheme?  Refine an idea about scale? Figure out how to do something new? Whatever it is they are trying to do they make many little sketches. Letting the part of their brain that works in visuals and space work it out. The value of the tracing paper becomes apparent when they have elements of the design they like, they can trace over it, to work on the next version. Or when you want to trace over existing elements and use them to bounce the form off. They end up with a big pile of ideas, that can be looked over by anyone involved in the process.

Imagine if, instead of this, they had to just sit there, bouncing gently in their white Panton chair, planning their whole building in their head, before they put it down on paper… sounds crazy right? So why don’t more of us draw, in order to figure out our ideas? Getting ideas out on paper  allows us to acknowledge and move past ideas that aren’t working and to see and improve upon the ideas that are.

So how do we use drawing in out art making practice to draw out ideas?

A lot of artists believe its best to just jump straight in, without thinking and to let the piece come straight from your unconscious, without filtering, or that maybe you lose the spark if an idea is over thought. I think that’s a valid way to work, and I say go for it. But for many of us especially those of us using 3d mediums, not thinking about it first is going to cause big problemos later.

I have been working on some clay studies [or maquettes] for an ideas I have. I want to create fairly realistic sculptures of the type of objects a gentleman or lady  of science and learning [of a past era] might have had on their desk. But instead of their objects  being arranged in an orderly fashion, they are in mad precarious arrangements, showing possibly the results of a disordered mind. 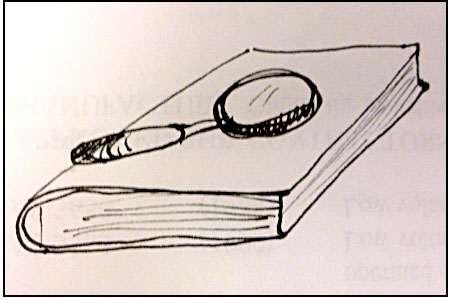 Above: one of my ideas brought to life and its matching sketch.

While I have been working on these I have also jotted down a few simple doodles. What is interesting is that even the merest scribbles reveal to me several technical problems I will have to deal with and also ways they can be over come, [ or will need to be changed]. Oddly the technicalities occur to me more doing the drawing than doing the studies. 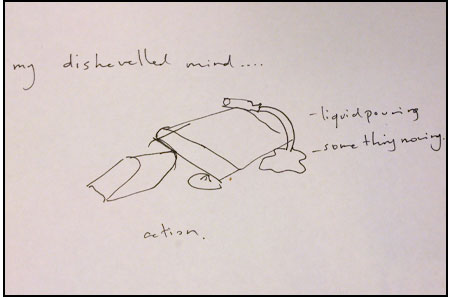 Above: this sketch of a pile of stuff [top] made me realize than unless the arrangement of objects was quite simple, like the study of the magnifying glass and the scarab, the objects would need something to act as  base, hence the study of the notebook under the bone. The notebook becomes part of the story whilst adding structural support.

Above: These two sketches suggested to me that you could approach the building process of the piles of objects from two different directions. The first would be to create a hollow mound like hill and have object protruding from it. The second would be to create each objects separately, then join them. This would give a more open look.

I decided I would use the second approach and have made a number of different objects to join together. 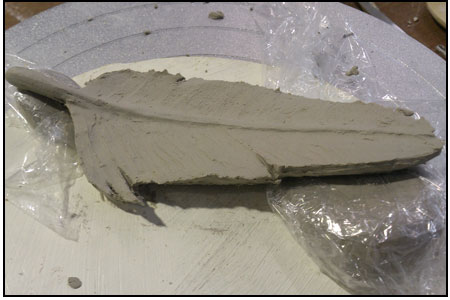 Above: two of the objects I have made for my first pile of objects sculpture.  A feather [top] and an open book. Note the section of clay remaining under the left section of book. I have left this because I don’t yet know exactly where the book will be placed  or where the joins will be. At the moment they are only rough but once they are joined  I will refine them.

There are still technical questions arising, but the combination of making studies and sketch designs is helping me to anticipate them.

You can see from my own drawings just how rough a sketch can be and still help you to draw out your ideas. There is no need for perfection at this point.

So as usual, I say to you good Sirs and Madames, please making me happy by going away and doing a few rough sketches> Get those ideas on paper, you never know what you will find out.