Don’t squash the creativity out of children.

Children are naturally creative. But it seems like we try to squish it out of them by the time they are about ten.When kids are first drawing [scribbling, mark-making], they are doing a couple of things.

This is an important phase in their mental growth too. Abstract thought, spatial awareness. They start trying to draw what’s important to them: mum and dad, tv characters, teddy, everything they love. They also seem to draw a lot of imaginary objects. Quite often they will also consistently draw the same imaginary or abstract thingummy over and over. My little one spent hours drawing a roundish shapes with just a line with another roundish shape in a different colour inside. There were usually two on the page. And while she was too little to be able to say much about them, they certainly weren’t random. 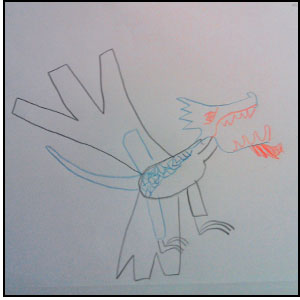 Above:  My kids picture of Lego’s Ninjago Ice Dragon.

So they’ve got the  7 and 8 year olds colouring in pictures. Ridiculous.  A couple of days later my little one bought home a whole bunch of drawings she and her friends had done. All sorts of kooky monsters and creepy scenes. And while not every one of them was 100% original [they like to copy each others work, or  anime], they all had a personal twist or flavour.

Above: Her friend’s picture of some little beasty.  Nice Suit.

And this brings me to the next part of the whinge. If you insist on kids doing colouring in there are a few techniques you could teach them so that they get something out of it. Shading, seeing the light and dark of each image is an example. or adding texture.

Above: my kid likes to make books. She makes several every week. This one is called ‘My familys eyes’ and it is what she thinks we see through our eyes. The page about me is a variety of pots on stands, [because of all the ceramics I make].

Above: another image from a book she made. She used old school pen and ink for this one. And yes I worry she will spill the whole bottle of ink but  you have to let them do stuff. My husband was a bit freaked out when I started teaching her to sew when she was 5.  Sharp scissors and needles!

Their art classes are pretty sorry too. Each semester they focus on the work of a famous artist, [no women so far], Vincent van Gogh, or Edward Munch, and while I have no problem with this, they do a sort of copy of the persons work…. but they learn neither technique, nor how to work through an idea of their own, and also don’t seem to learn what the artists in question may have been aiming for. Disturbing. They seem to focus on the salacious aspects too, like focusing on Vincent’s mental illness, instead of what he was trying to do with his art.

Above: a dinosaur hand-puppet she made for her boy bestie. I love the gruesome mouth.

It seems as if the main aim of these classes is ease. Something easy to fulfill the curriculum.A curriculum designed by people who seemingly don’t see the value of art. And where’s the chance to do something original? Where are the techniques? Maybe it should be separated out into art history and art making?

If I had my way they would teach art a little like they teach English. They separate English out into structure: spelling, grammar, how to put together an argument. Then in a separate lesson, they do creative writing.  There are so many techniques you can learn in art. Lets focus today on composition, or  line or whatever. Then on this other day, lets paint or draw whatever you want. Lets talk about ideas. 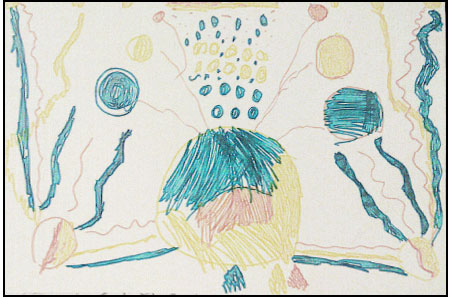 Above: this one is a complicated tale of sun and water power which comes down from the sky and combines to create a super energy force. They really do have great ideas if they are left to their own devices a bit.

It seems most primary school teachers have  little skill in art. This is fair enough. You can’t be great at everything, and I know many teachers do try really hard [ I’m thinking of you here C.T., I know how much work you put into it], but one of my kid’s teachers, was made so hysterical by teaching them art, she almost couldn’t do it. Too messy! Too much excitement! Ok maybe art isn’t as important as being able to read and count, but it is part of the curriculum. It’s also important to many jobs. These early lessons are the possible building blocks for designers and artists everywhere. But by the time kids get to about ten they seem to have a lot of their natural creativity bored out of them and they become passive consumers rather than creators. It’s not about being good at art: [or not only] creativity is vital for many jobs including science, maths and  engineering. You are not going to be good at inventing new ways to do something if you close your mind. 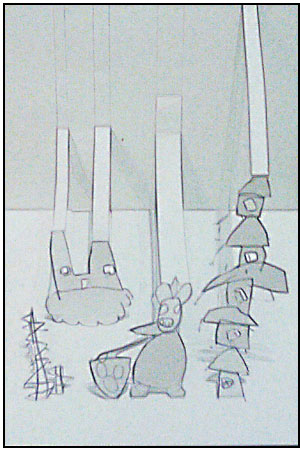 Above: a pop up card. Kung fu Panda stirring pot of noodles, with chinese house and floating cloud temple. I helped here with the logistics of this and some of the super sharp bits, but the ideas and drawing are all hers.

Above: a bit more detail of the pop up.

Also I want to give a big thumbs up to dedicated art teachers. When I went to primary school we were lucky enough to have a guy who just taught art, and a special room to learn in. This is important because then art making doesn’t become a 40 minute adventure in ‘trying to not make a mess.’  The art room was a bit of a haven for me [thanks Mr Evans], where we actually learnt techniques and got to have ideas.

For me this whole topic is tying in with the idea that studying art, in Australia at least is seen as very unimportant. And yet art events, in Sydney where I live get the most massive attendance. Are the people who go to these art events the same people who think learning to do art is unimportant? There’s gotta be some crossover because events like ‘Sculpture by the Sea’ is so packed every year its like going to the hottest night club in town.  So you go to see art, but you don’t want your own kid making any? And do people also think that their ipad/phone/tablet/Mercedees/ is designed by someone who never studied art? Are the graphics in their favourite video game designed by someone who never did art? Is the beautiful coat /funky T-shirt they are wearing designed by someone who never did art?

So nurture those small ones please:

Ultimately the answer is as Kevin Costner’s character in that weird baseball film said ‘If you build it they will come’. In other words give them space, supplies and time and let them expand their nutty little minds.

And if you think the creativity was beaten out of you as a kid? Then apply the above rules to yourself and your inner child. Give yourself a chance to hear those wild ideas and time and space to make them: creativity can be re-learned.

That’s it, my rant is done.

2 comments on “Don’t squash the creativity out of children.”

This entry was posted on November 15, 2012 by makingartme in creativity, Rants and tagged art education, children, teaching art.