If you have seen the drawing section of the making art website , you will know that I think the key part of drawing as a skill is learning to see what you are looking at. Sometimes our brains want to put in information that doesn’t exist, like trying to draw the whole length of a foreshortened arm instead of drawing only what we can see: a short stubby arm. Or your brain will reduce what you are looking at to a symbol, like the classic drawing of an eye, rather than look properly at what is in front of you. Other times we see a complicated shape and think ‘Oho  I can’t draw that!’ so our mind forms a blockade of fear. Sure some things are really freakin’ hard to draw, and they will take practice, but this next exercise is good for both accurately seeing, and drawing difficult shapes.

Something about focusing your attention on these odd nonsensical shapes, overrides your brains  urge to reuse a known symbol because one doesn’t exist  in your memory. I mean if you think of a ‘chair’, you get an image of a chair in your head. If I say to you think of a shape around 2 chairs and a table you probably don’t have something come quickly to mind.

The only ingredients you need for this exercise are a pen or pencil, some paper and a bunch of objects to draw.

Start with something simple like a still life. Try and get a few objects into it that have some cut out sections. If you want to keep it extra simple start with some objects on a flat surface. Some stationary on the desk, or some cutlery on the kitchen table. Have some objects overlap to give some closed shapes. Having you edges disappear off the page works well. 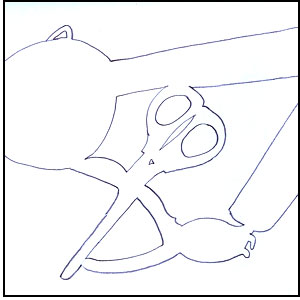 Above: Stationary [ruler, scissors, holepunch, glue stick, ball of string], flat on the desk. The ball of string is the hardest thing to draw here because it is not flat like the other items.

If you are having trouble figuring out how to do closed shapes if the objects are on the centre of the page, you can use an imaginary frame to close the shapes.

Above: Cutlery. Closing the shapes with an imaginary frame.

Next try a still life that’s a bit more complicated, so you will have to prioritize what is part of what shape. 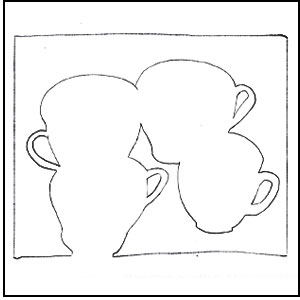 Above: 4 teacups. This is quite tricky because you have to really look at the outside shape. You can’t rely on that symbol [hiding in your head] for a teacup.

Then try something bigger like the aforementioned chairs. [For some reason this exercise often seems to be about chairs.] 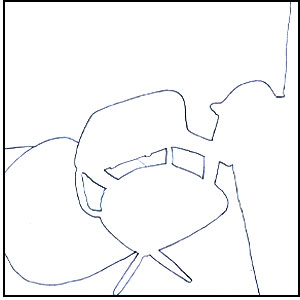 Above: A chair and a beanbag.

These exercises often look particularly nice, if you selectively colour in either the positive or the negative shapes you have drawn. 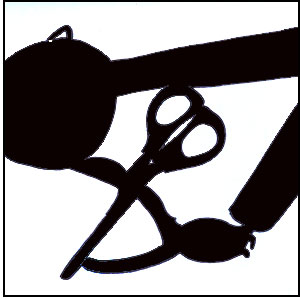 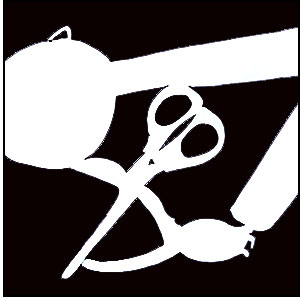 Above: the positive or negative coloured in a solid black. 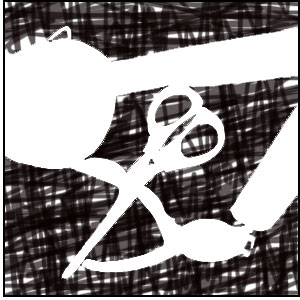 Above: Try some texture. The same image with  scratchy Photoshop background.

Above: Various versions of the same image.

Above: You don’t have to colour the positive OR the negative, you can do a little of both. 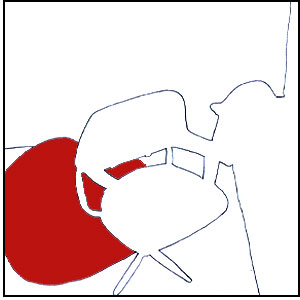 Above: Red beanbag.  You can also pick just one element to be coloured. This is nice.

After you’ve had a few goes at this why not set yourself something a little diabolical, like a bicycle in front of a landscape scene?

This exercise really does start to improve your eye for shape, and it also helps with your use of composition, because you start to really see the white  space [or other colour negative space] of the page as an entity, not just as ‘the thing behind the  object I am drawing.’

This entry was posted on September 7, 2012 by makingartme in Drawing, Exercises and tagged 2d Mediums, 2d Technique.